Art can be dangerous. It challenges societal norms, pushes the boundaries of good taste, forces us to imagine beloved cartoon characters having sex with each other, etc. But sometimes art can be dangerous in far more literal way. If you thought that a trip to a stodgy old gallery carried no risk of horrifying injury and/or death, you might want to think again.

South Korean artist Lee Bul wanted to demonstrate the transient nature of beauty, and what better way to do this than by putting a bunch of rotting fish and sequins in plastic bags and hanging them on a wall? No, seriously, if you can think of a better way, we're all ears. No? Nothing? Then take a seat, Rothko. As for Bul, her problems started when her piece, deceptively named Majestic Splendor, went on display at MoMA in 1997, and was promptly taken down because the stench made visitors sick. 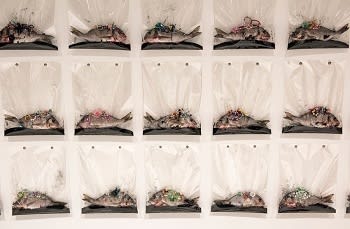 Lee BulThere are plenty of other places in New York where you can experience the same feeling for free.

So not exactly the best start. Undaunted, Lee later brought her fishy opus back to the public's nostrils in 2018 with an appearance at the Hayward Gallery in London, this time with an odor-reducing chemical included in the bags to help mitigate things. There was just one problem: That chemical was volatile, and could explode when mixed with the kind of organic compounds that might come from, say, a piece of rotting fish. Luckily, Lee's artwork didn't involve any dead fi- whoops.

Sure enough, right before the exhibition's return to public glory, a bag of fish exploded while being moved, starting a fire in the gallery. Firefighters were called to put out the blaze, and a security guard required treatment for possibly the grossest kind of smoke inhalation. On the other hand, Bul's exhibition did go off with a bang. We'll see ourselves out.

The 9 Most Mind-blowing Disguises in the Animal Kingdom

In 1991, artist duo Christo and Jeanne-Claude took time out from gift-wrapping large sections of the planet to set up several thousand umbrellas northeast of Tokyo, and also on ranches outside of Los Angeles. Each one stood 20 feet tall, weighed 485 pounds, and altogether cost a cool $26 million to set up. Now, if putting up giant heavy umbrellas in a windy part of California seems like a bad idea, well, that's because it was.

Tragically, one of the pieces came loose of its moorings in high winds, barreling across the landscape and injuring multiple people before fatally crushing a woman against a boulder. Also, a worker removing the umbrellas in Japan was electrocuted to death after the crane he was operating touched a power line. We're glad they only set up this exhibit in two countries, or the world population would be considerably smaller today. 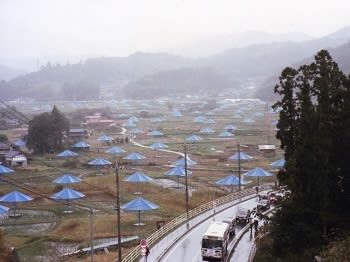 Dddeco/Wikimedia CommonsThough there would be legends among umbrellas that this world was once ruled by something called "humans."

The 6 Most Unintentionally Hilarious Buildings Ever Proposed

Maurice Agis was a British artist known for creating large, colorful inflated structures that people could walk around inside. Picture a bouncy castle on LSD, and you're getting close. Unfortunately, the effort taken to construct his visually stunning interiors didn't necessarily extend to the observance of proper safety precautions.

Tragedy first struck in 1986, when his Colourspace installation was blown off the ground with some very confused, very bruised visitors still inside. Rather than questioning the wisdom of setting up a large inflatable structure filled with people in a windy area, Agis decided to go bigger and bolder with his sequel work Dreamspace V in 2006. Sadly, the wind decided to go bigger and bolder too, lifting the entire installation 30 feet into the air. If it hadn't crashed into a CCTV pole, it might still be going.

This time, two people were killed and 13 injured. Charges of negligence were leveled against Agis, who apparently ignored the subtle warnings that hinted at the possibility of disaster, like when people told him they saw the structure being lifted by the wind. Oh, and also that other time when this exact same thing happened. He vowed never to create large installations again -- a fairly easy promise to keep, considering he died not long after (for boring, non-inflatable-object-related reasons).

5 Evil Species Of Flies You Don't (Want To) Know Exist

It's getting increasingly hard to tell when something is a work of art and when it's simply a building needing repairs. Case in point: Doris Salcedo's Shibboleth, which aimed to represent the ways humans separate and marginalize one another via a 500-foot long crack in the middle of the Tate Modern in London. 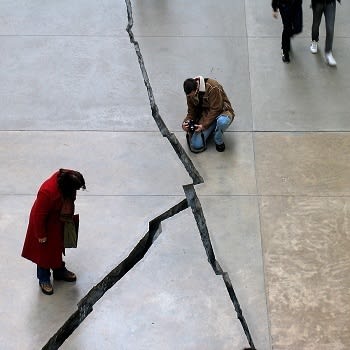 Gdobon/Wikimedia CommonsThat or there was an earthquake and they were simply making the best of it.

The good news is that the employees were very aware of the hazardous nature of the piece and took adequate precautions to mitigate risk of injury, such as putting up clearly marked signs. The bad news is that people still tripped over it and injured themselves. As in well over a dozen. At least one patron would go on to say that she was "not impressed by the exhibit," though whether that was because of the abstract way the work portrayed its core message or the nasty bruise she got from tripping over it, we do not know.

One day, German artist Carsten Holler had a brilliant epiphany: "Sure, stairs are great and all, but what's the most practical and awesome way to get from A to B?" Slides. The answer is slides. 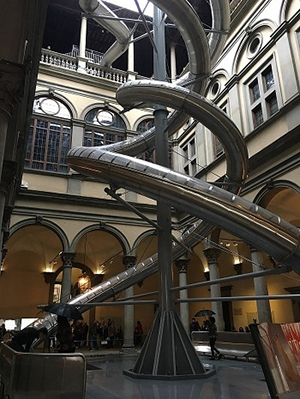 Manuelarosi/Wikimedia CommonsThe answer is always slippery slides, regardless of the question.

We are once again at the Tate Modern, for the 2006 experimental piece Test Site, which featured several curving metal slides (the largest being five stories tall and 190 feet long) and encouraged visitors to go wild on them. The exhibition operated as art, playground, and experiment in human usability all at once. An architectural firm even used the interactions of patrons to assess the utility of slides in city planning. And the best part is that you didn't even have to purchase any McDonald's products before being allowed to use it.

So does that mean we're going to be using giant slides to get around the office in the near future? Well ... based on the results, there might be a few kinks to sort out first. Over the seven months the slide was operational, numerous people suffered bruises, friction burns, and injury, including one woman who broke multiple bones in her hand and successfully sued the gallery. But right as soon as we evolve mega-strong bones and friction-resistant skin, we should definitely get on this.

The 6 Most Terrifying Theme Park Rides Ever Built

When your children ask you how the dumbest apocalypse started, tell them the sculptures claimed their first sacrifices early in the 1970s. In 1971, a work by Richard Serra toppled over and smushed the worker setting it up. Also in 1971, Alexander Calder's Five Disks: One Empty was being lowered by a crane at Princeton. One worker rode with the piece (we can only presume "Dr. Strangelove-style") and another directly underneath. It shouldn't be hard to see where the problem was, and indeed, the crane's cable snapped and both men were killed. But it was all worth it for, uh, whatever this thing is.

In 1983, a giant iron sculpture by artist Beverly Pepper fell from its hanging place, striking and killing a gallery worker. Later, in 1988, another Serra sculpture fell and trapped two workers underneath, leading to one of the men's legs being severed. But the metal gods demanded more. 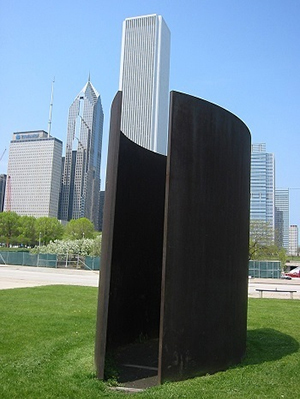 Discosour/Wikimedia CommonsIf the sculptures team up with the umbrellas, we're all fucked.

Like we said, art can be dangerous. The best-case scenario is that it'll challenge your mind and enrich your understanding of society. Worst-case, it'll trip you up, set you on fire, and leave your body mangled on the ground. We'll let you decide if it's worth it.

For more, check out The 7 Most Baffling Pieces Of Art (Made With Genitals):