Dana White Is Ripping Off 'Mortal Kombat' You Guys

The UFC's boss Dana White has secured a private island where he'll hold weekly matches for international fighters. He's also going to hold April 18th's UFC 249 event on Native American tribal lands near Fresno so he doesn't have to comply with pesky California state pandemic prevention orders. Meaning he could bring the virus with him and spread it among the Native Americans, in a painful, extremely foreseeable modern retelling of colonialists spreading smallpox, but it's best not to spoil the twists and turns of the smash hit Fyre Festival-style Netflix documentary that will be made from all this. 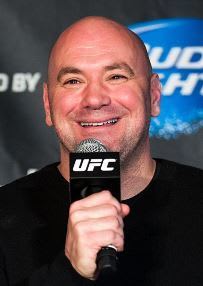 Andrius Petrucenia/Wikimedia Commons"Yell at me about ethics all you want but these fights were all sanctioned by the Outworld Fighting Commission."

The mysterious fighting island is the real draw here. No one knows which island it is or where it is. It could be because it's not on Earthrealm. Fighters can only reach it by boat. You don't find it. It finds you. You pick a direction and set sail. If the island deems you worthy, it will engulf your ship with a thick mist where you will encounter tests of might, strength, and basic arithmetic. Those who survive the sea trials will be greeted by Shang-- Uh, Dana White, whose eyes glow green with the energy bestowed upon him by the island when he ventured to its core and arm barred its heart. It is then that he will tell fighters that this is no mere tournament. The fate of the universe hangs in the balance. They'll get a chance to become acquainted with the four-armed monsters, cyborgs, ninjas, and cyborg-ninjas they'll be facing during the tournament wine mixer meet-and-greet.

It's essentially a coronavirus world tour. There's no word on if they'll sell tickets so fans can attend Bloodsport: Live!, but it wouldn't be surprising if the tickets sell. This kind of stubborn and wreckless persistence to put on a precious head trauma show is bound to attract a certain type of personality that believes they can't be brought down by anything smaller than a bear, let alone a microscopic virus. These events could single-handedly wipe out the market for black shirts that have the Punisher skull logo filled in with the Blue Lives Matter flag.

Luis can be found on Twitter and Facebook. Check out his regular contributions to Macaulay Culkin's BunnyEars.com and his "Meditation Minute" segments on the Bunny Ears podcast. And now you can listen to the first episode on Youtube!