Sometimes, politics is more art than science. Specifically, a surrealist sculpture made out of middle fingers and slowly rotting lemons. An eye for an eye may leave the whole world blind, but hopefully, these stories of politicians descending to impressive levels of pettiness will spread your eyes wide open.

In 2009, noted American everyman and governor Arnold Schwarzenegger was invited by his friend, former Democratic mayor of San Francisco Willie Brown, to say a few words at an event for the Democratic Party that happened to be taking place at a hotel he was visiting. He didn't think it was going to be that controversial. At least, that's what his spokesperson claimed. All the attendees saw was this Republican ogre barging into their party to lecture them about bipartisanship.

It didn't go well. At one point, ex-comedian and San Francisco Assemblyman Tom Ammiano shouted "You lie," a callback to a recent incident in which Representative Joe Wilson famously shouted the same thing to President Obama. Others, according to Ammiano, "booed" and "walked out." Schwarzenegger's spokesperson claimed they "never heard any hecklers," which seems unlikely, because when a bill authored by Ammiamo to fund a San Francisco waterfront restoration project using state money reached Schwarzenegger's desk, his response was ... telling. 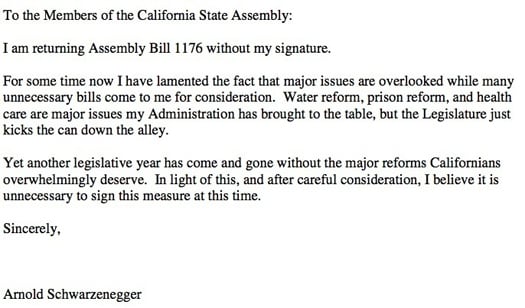 If you read between the lines of Schwarzenegger's dispassionate refusal to sign the bill, you'll notice that the first letter of each line spells out a much less polite message to the Assembly. Again doing his best "gif of Mariah Carey saying 'I don't know her'" impression, Schwarzenegger's spokesperson insisted it was a coincidence. Given that the odds of such an accident happening are 8 billion to 1, it's reasonable to suspect that Schwarzenegger's real reason for exercising his veto power had less to do with his distaste for "unnecessary bills" than Ammiano's brand of comedy. It sucks for that waterfront that wanted to be restored, but even it would have to give it up.

How The Hell Did Arnold Schwarzenegger Pass For An Everyman?

4
A Sofa Caused A Diplomatic Crisis

In 2010, Israel took offense to Turkish TV drama The Valley of the Wolves, which didn't depict the Israeli special forces in the best light. Specifically, it portrayed them as a bunch of "child snatchers." Not about to let that fly, deputy foreign minister Danny Ayalon summoned the Turkish ambassador to Israel, Ahmet Oguz Celikkol, for a little chat.

Things got off to a rocky start pretty much immediately when Celikkol showed up to find himself confronted not only by Ayalon and his colleagues but a whole crowd of reporters, in front of whom Ayalon refused to shake Celikkol's hand. Things got even rockier when Celikkol noticed that the diplomats appeared to have neglected to display Turkey's flag, as is customary at such meetings. The terrain got downright treacherous when Celikkol was directed to his seat, a mushy blue sofa set several inches lower than the chairs the Israelis sat in on the opposite side of a wooden table. The effect is one of a first-grader in the principal's office after he's been caught writing "Mr. Hoffman smelz lik but" on the floor in Magic Marker. All of this could have been excused as an unrelated series of unintended mishaps if Ayalon hadn't proudly announced to the reporters that it was totally intended. He all but took the pens out of their hands and wrote "looks like a little baby man" on their notepads.

After the deputy minister finished ranting about the state of Turkish television and the two parties went their separate ways, the Turkish president threatened to recall the ambassador to Turkey. The deputy minister insisted that his criticism of the TV show remained valid but conceded that perhaps his point could have been made in an even slightly less childish way. He finally caved and issued a formal apology, which is why we're not currently embroiled in a world war over furniture.

The 6 Most Ridiculous Abuses of Diplomatic Immunity

In 1975, the residents of a small coal mining town with the clickbait name of Vulcan, West Virginia faced a bit of an issue. Namely, the only bridge out of their town collapsed, and the state government was oddly reluctant to fund a bridge to an ailing town in the middle of nowhere. Fed up with the state's heel-dragging, the residents decided to boldly go where most Americans wouldn't for quite some time and write a letter to the Soviets.

Asking for money from the Soviet Union was, to say the least, an unexpected move for an American town to pull at the height of the Cold War. It was also the most brilliant move a town like Vulcan could pull at the height of the Cold War. After all, they were all but guaranteed success: How could the Soviets ever have turned down such a golden opportunity to humiliate their best nemesis? Spoiler alert: They absolutely couldn't. They positively jumped at it, in fact.

This was, of course, major international news, which led to one final twist in the story. West Virginia got the message, and the state legislature coughed up $1.3 million for a shiny new bridge into Vulcan. It still stands as a monument to the triumph of capitalism and petty shenanigans, apparently covered in graffiti.

In 2014, a resident of Peoria, Illinois named Jon Daniel created a parody Twitter account to vent his frustration with his mayor, Jim Ardis. Under the cartoonish digital mask, Daniel accused Ardis of various nefarious deeds, such as using drugs, hiring prostitutes, and pocketing cash from the town treasury. Everyone who uses Twitter knows that this isn't uncommon on the social media platform -- parody accounts exist to mock everyone from Prince to God. Admittedly, that's a short range.

Ardis, however, apparently doesn't use Twitter. After presumably spending five minutes dialing the judge's number into his rotary phone, he obtained a warrant against Daniel for the misdemeanor of "impersonating a public official" and sent the Peoria SWAT team to swarm Daniel's home. Police seized Daniel's computer, along with several other PCs, four iPhones, an iPad, and two XBOXes. They couldn't take the chance that he'd roast the mayor over some Call of Duty with the boys, apparently.

A week later, the State's Attorney's Office of Peoria County announced that no charges would be filed concerning the parody Twitter account because it turned out it wasn't actually against the law. Backed by the ACLU, Daniel sued the city for violations of his first and fourth amendment rights and reached an out-of-court settlement awarding him $125,000 in 2015. Meanwhile, Ardis's efforts to silence his trolly dissenters backfired majorly, as dozens of new parody accounts were created once the story hit the national media. Trolls really are like hacky, cringey weeds -- you pluck up one, and several more take its place.

1
A Former Governor Destroyed His Successor Over A Fountain

William Donald Schaefer was the mayor of Baltimore for longer than a lot of Cracked readers have been alive. He moved up to governor and later comptroller of the State of Maryland. He was the kind of politician who would strongarm you one moment, then jump into the seal pool wearing a striped swimsuit and carrying a rubber ducky the next.

He was in the governor's mansion for eight years, which is plenty of time for some redecorating. In charge of all that was Schaefer's longtime companion and official hostess, Hilda Mae Snoops, with whom Schaefer had commissioned a fountain fountain designed and built with private funds for the grounds of the governor's mansion. In a delightfully tacky tribute to his state, it featured orioles, crabs, and probably boxes of Old Bay. Schaefer dedicated the fountain to Snoops after her death in 1999, the same year he moved up to state comptroller. The new governor, Parris Glendening, wasn't a Schaefer fan for various boring political reasons, so he hit him where it hurt: right in the fountain. Under the guise of "saving water" during a drought in Maryland, he shut off the water to Hilda's fountain. He was about to learn that people who live in glass houses shouldn't disrespect memorial water features. We're pretty sure that's the idiom.

You see, Glendening was in the midst of an adulterous relationship with his Deputy Chief of Staff, Jennifer Crawford. In fact, she was pregnant with his child at the time. Schaefer knew that, so in revenge, he circulated a letter to the press, spilling the deets. He even called Crawford the "big boss" of Glendening's office. The revelation forced a shotgun wedding (and divorce) on the premises of the governor's mansion, presumably in sight of said fountain, which was turned back on when Glendening lost the governorship in 2003. At the turning-back-on ceremony, which was absolutely a thing, Schaefer said he thought only of two things: how much he loved Hilda, and how much he still hated Parris Glendening.