An Open Letter To The Makers Of Madden

I have been a Madden devotee for almost 15 years. My first was Madden 2004, the one with Michael Vick on the cover. It took me maybe one Michael Vick out-scrambles-11-defenders-in-the-backfield-and-then-throws-a-70-yard-bomb for me to fall in love. I bought Madden 2005 the year after, the one with Ray Lewis and the world-shattering "hitstick" and marveled at the wonder of knocking ballcarriers into the bleachers with a forearm. The year after that, I bought Madden 2006, and on and on it blissfully went. I have spent countless hours, possibly years playing franchise mode, sitting alone in a dark basement, the only light reflecting off the TV screen about five inches from my face. It's probably why my vision could now be described as "Hey, dude, you just bumped into me," and I don't regret it.

I was happy to buy a new Madden every year up until 2009, when I started seeing features disappearing from the game. Gone was The Tony Bruno Show from franchise mode, a high-energy radio show that added a bit of immersion to your season. Gone too were create-a-fan and lead-blocker-mode. But those things could be forgiven because there's only so much room on a game disc and you have to prioritize features, right?

So I continued to buy Madden every year almost out of obligation to an old friend. More features were stripped and then reintroduced to us later, as if brand new. The marketing team must have assumed that the NFL's concussion issue had also affected Madden players' brains as you trotted out, year after year, a new "real-time-physics-engine."

The game's focus shifted to the "Madden Ultimate Team," which allowed you to purchase card packs and compete with others online. It was right out of the "pay-to-win" model that you, EA have become famous for. I even gave it a shot, because when you're in a relationship this long, you're willing to try new things just to make your partner happy. But there's a reason this metaphor sounds a lot like getting screwed, and it's not because of all the hi-fiving that was happening afterward.

Madden 2013 was the last one I spent my own money on. I couldn't do it to myself anymore. I still pick up a controller if some friends are playing new versions at a party (I go to really nerdy parties) and will still watch YouTubers play franchise mode online. Because of this, I can confidently say that Madden 20 is no better than any other edition from the past decade. The franchise mode has been ravaged. The game doesn't even list what team a player used to play for -- a feature made available in sports sim games a good 20 years ago. Why? Are the players in witness protection? What happened to mini-games? What happened to the goddamn Superstar mode? Why can't I create a fan! 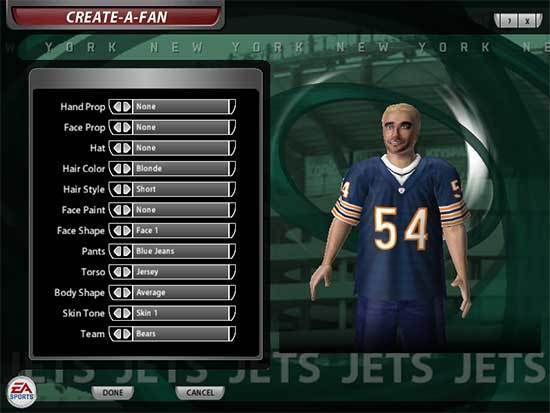 EA SportsThis is the face of love.

It doesn't matter, because as you're aware, your exclusivity license with the NFL is coming to an end. No longer will those who want a decent football game paired with real-world branding be held hostage to a monopoly. 2K is breathing down your neck like a D-lineman chasing down a scrambling chef at the buffet table. And you better be worried, because 2K games are good. I played NBA 2K19 the other day, and I had a verifiable jealousy boner from all of the sheer competence. There is custom commentary for playoff games and holidays. There is a separate mode for streetball and All-Star minigames. There's Bill Simmons!

So this is it EA. This is your last shot. You have the NFL all to yourself for Madden 21, so I hope you make the most of it. I'm a millennial, so I treat brands with a reverence that most older people reserve for religion, but I'm also a millennial, so I'll ditch that brand hard when I feel it has wronged me.

The point is, I don't want to give up on you EA. We've had too many good times together: The nights sitting alone in my basement, not getting laid, as I played 15 years into Eli Manning's future. Talking smack against my buddies as I sailed a perfect pass into Randy Moss's outstretched arms, while still not getting laid. I wouldn't trade those moments for anything, not even getting laid. I want to buy this game. I'll take any reason to buy this game. Hell, just keep the graphics, update the rosters, and reboot to 2005, and I'll be happy. We can start over and build from what worked.

Instead of taking out features, or bending to corporate pressure, let's just make a good game, even if it means taking a bit of extra time to do so. Because I swear to John Madden above (I know he's still alive, whatever), if you mess this one up, I will never come back.

Dan rages about video games sometimes on Twitter @realdanduddy, and hosts The Bachelor Zone Podcast, where you can hear him give a sports-style breakdown of all things happening on The Bachelor.